Going to the Delacorte Theater to see Shakespeare in the Park is among my favorite performance events every summer. Last week I took my sweetheart Shelley to see The Tempest starring Sam Waterston, and we were certainly impressed.

The Tempest is one of Shakespeare’s best plays, and if you doubt such a statement, I refer you to Gail VanVoorhis, leader of the Lotos Club Theatre RoundTable, former teacher at Marymount Manhattan College, and an overall general goldmine of knowledge about all things Shakespearean一she might just change your mind. Likely the last play that Shakespeare wrote, The Tempest has has a sophisticated plot and beautiful language, as well as some of the Bard’s most complex characters (including Prospero and Caliban). 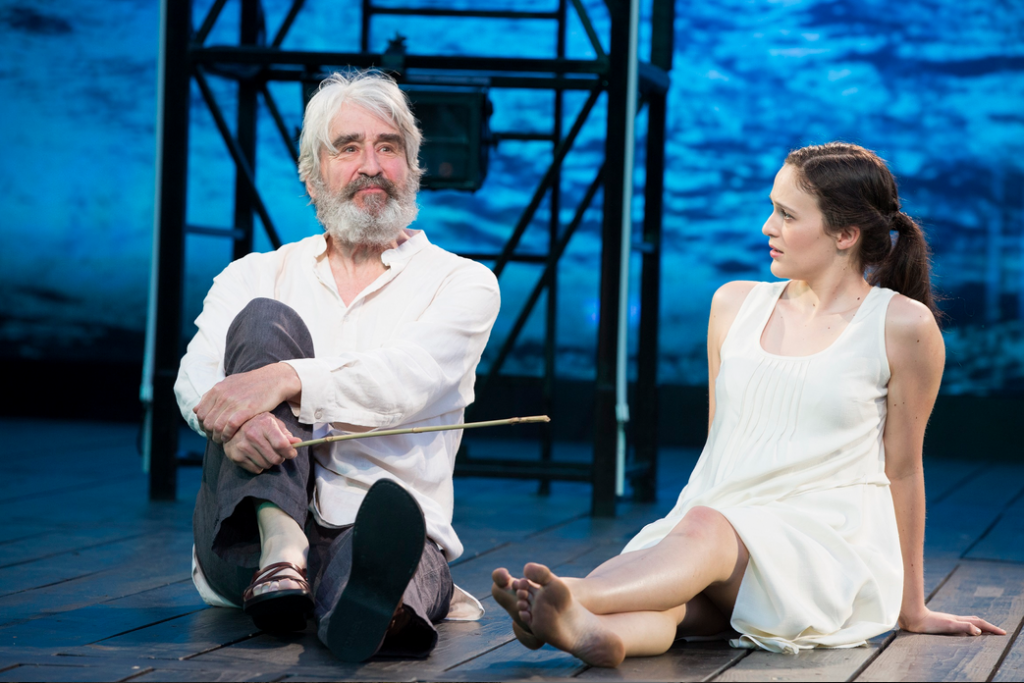 Sam Waterston as Prospero and Francesca Carpanini as Miranda,
photo by Joan Marcus

Sam Waterston is a wonderful actor, but his performance as Prospero felt a bit uneven. Early in the play he was hard to follow, although I presume he was worried about the actual New York tempest that had left the Delacorte stage soaking wet.

To the Public Theater’s credit, performances of Shakespeare in the Park are never cancelled in advance, and the entire production staff does its best to handle inclement weather. Before the show began last week, there was a light summer shower. Shelley and I and our friends brought plastic ponchos, just in case there was more rain. Clever lady, that Shelley. (Umbrellas aren’t permitted in the theatre.) When the weather cleared up a bit, the show began, however not before stagehands could sufficiently dry off the stage. From our seats we could see the residual water glisten under the stage lights, and more than once we witnessed actors slip. Even as they momentarily lost their balance, I was worried someone would twist an ankle at the very least. At one point Louis Cancelmi who played Caliban lost his balance and was unable to regain stability. He fell flat onto the stage floor landing on his back, and the entire theatre gasped. The actors are all lucky to have walked away from the performance relatively unscathed.

My instinct was to question why the stagehands, who were fully costumed, were not sent out during the first act to wipe the stage with towels. When I checked with Gail VanVoorhis, she said absolutely at the Globe, whether the original or the modern one, the water would have been mopped up, and the actors probably would have commented about the weather and the wet floor in their dialogue. Perhaps contemporary U.S. American actors trained in the Method do not like changes during a performance that might pull them out of character, but safety concerns are an incredibly important aspect of putting on any show, whether circus or open-air theatre, and such concerns shouldn’t go by unnoticed. 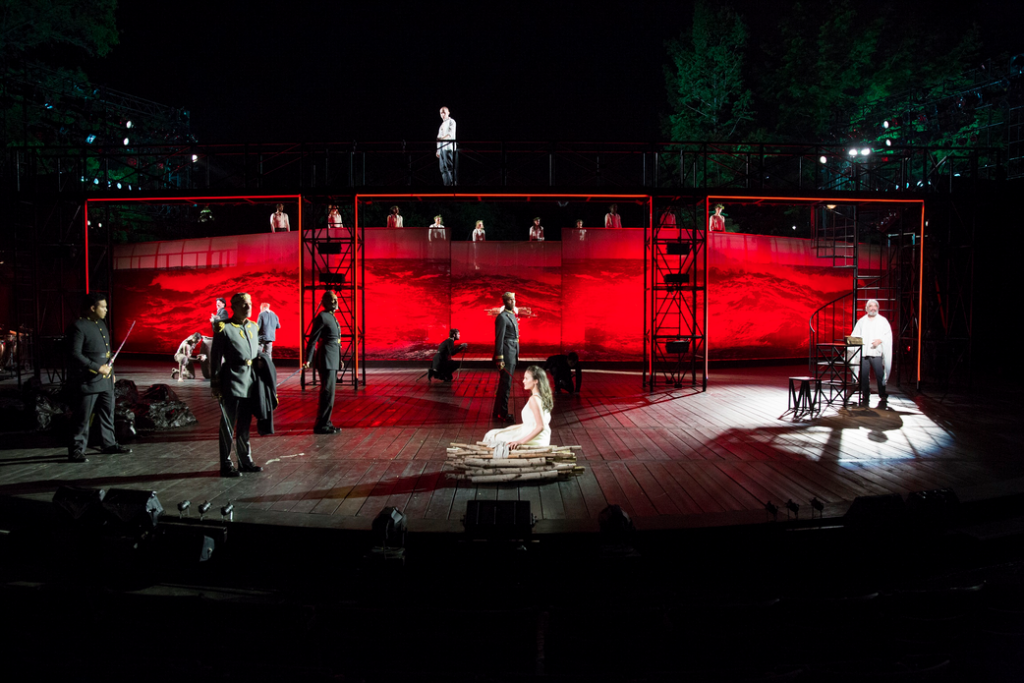 A view of the entire stage with projection screens,
photo by Joan Marcus

Even with the water hazards during the first half of the show, though, it was a glorious night at the theatre. The stage was wiped up at intermission, and during the second act, Sam Waterston was simply captivating. I’m sure that on dry nights, the production is solid from beginning to end.

One Response to “A Tempest in Central Park”