Ladies and gentlemen, tickets to my newest cabaret are on sale and going fast!
The great adventure of starting the Big Apple Circus and being its artistic director and ringmaster for 38 years continues as I find a new life — as a cabaret performer (I even surprised myself)!
This is your once-in-a-lifetime chance to see the NYC stage debut of Katie Galuska, who is 8 years younger than half my age (yikes!). She’s a real find.
Here’s the official promo announcement: Paul Binder, Big Apple Circus founder and 38 year ringmaster, returns after successful benefit performances of his previous cabarets “Paul Binder Risks His Life Singing” and “The Tall and Short of It” at the Metropolitan Room and various other venues. “P-P-P-Paul & K-K-K-Katie” will introduce a dazzling young performer, Katie Galuska, to New York City. Once again, the Music Director will be the brilliant Dennis Buck.
ALSO: Special Added attractions Dana Mierlak and Petra “Petie” Subin
Tickets can be ordered online at triadnyc.com. Triad is located above the Turkish Grill (no kidding!) at 158 West 72nd Street, between Amsterdam and Columbus. There is a two drink minimum.

I recently wrote to alert you all about the very funny musical parody, Me the People. It’s a four person all singin’, all dancin’ off-off-Broadway show. The critics raved and I’m raving as well! It’s being performed at the Triad Theater which is a beautiful facility located above a Turkish restaurant on west 72nd. You’re sure to laugh and applaud as the cast is excellent at skewering our current political scene.

The following will give you an idea of the some of the ridiculously funny stuff of the show: 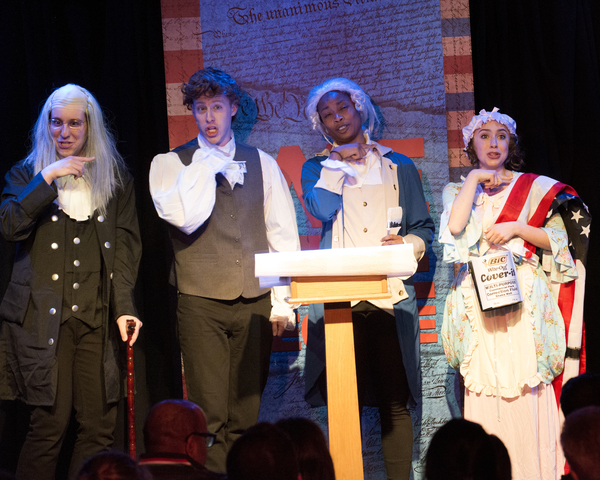 Founding Fathers and a Mother 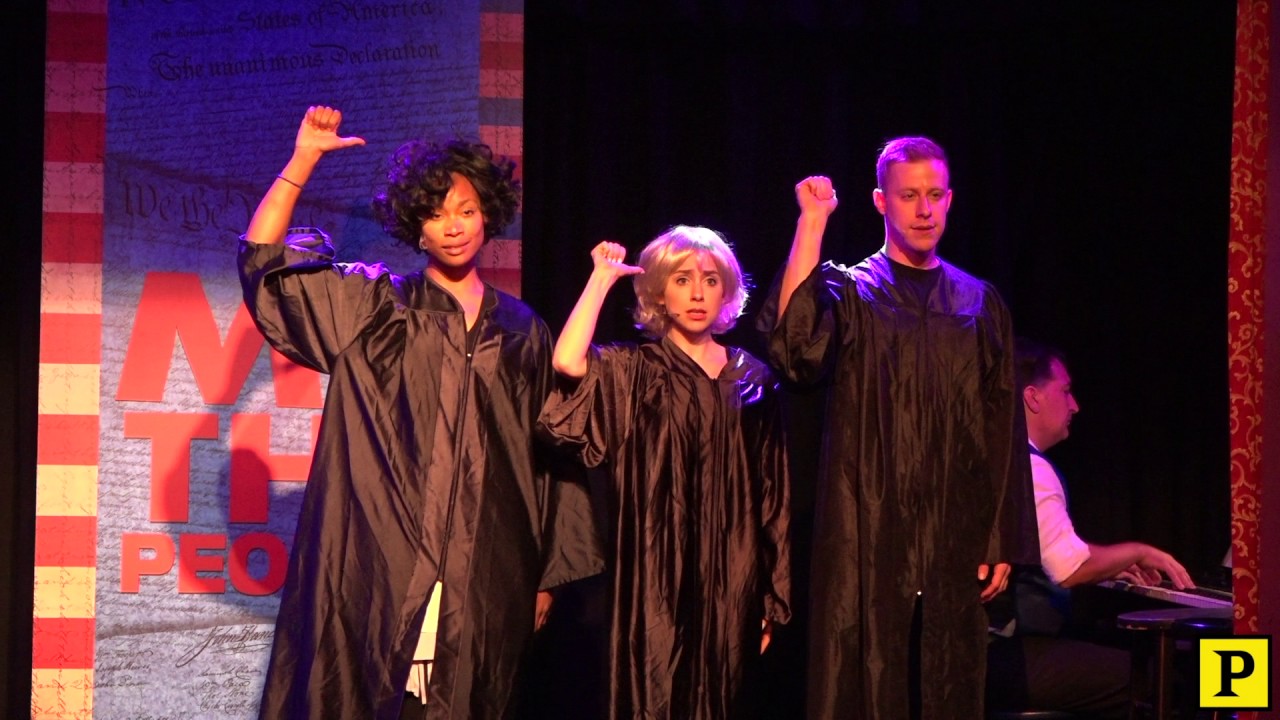 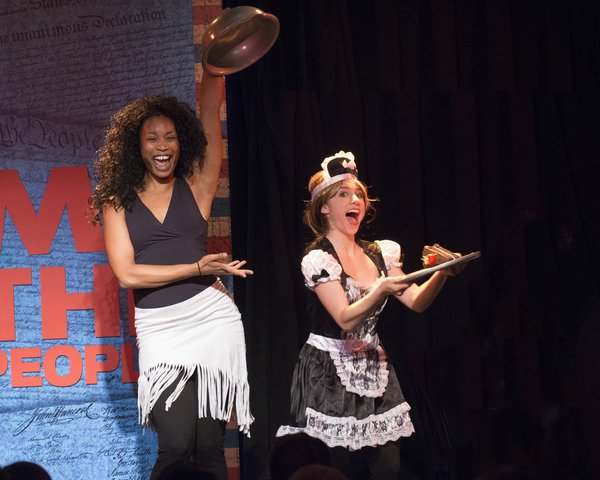 Welcome to the Hotel Mar-a-largo 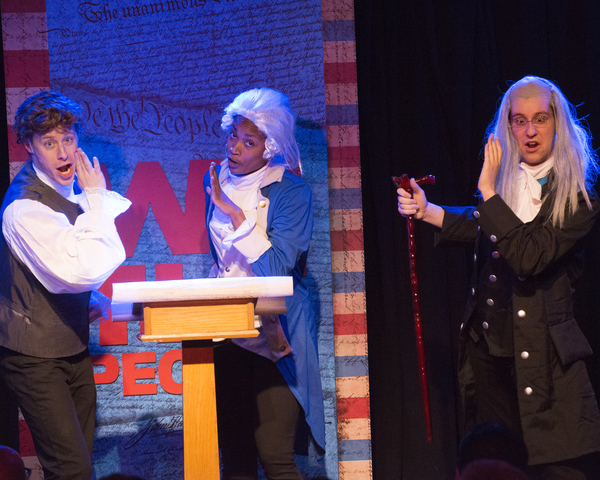 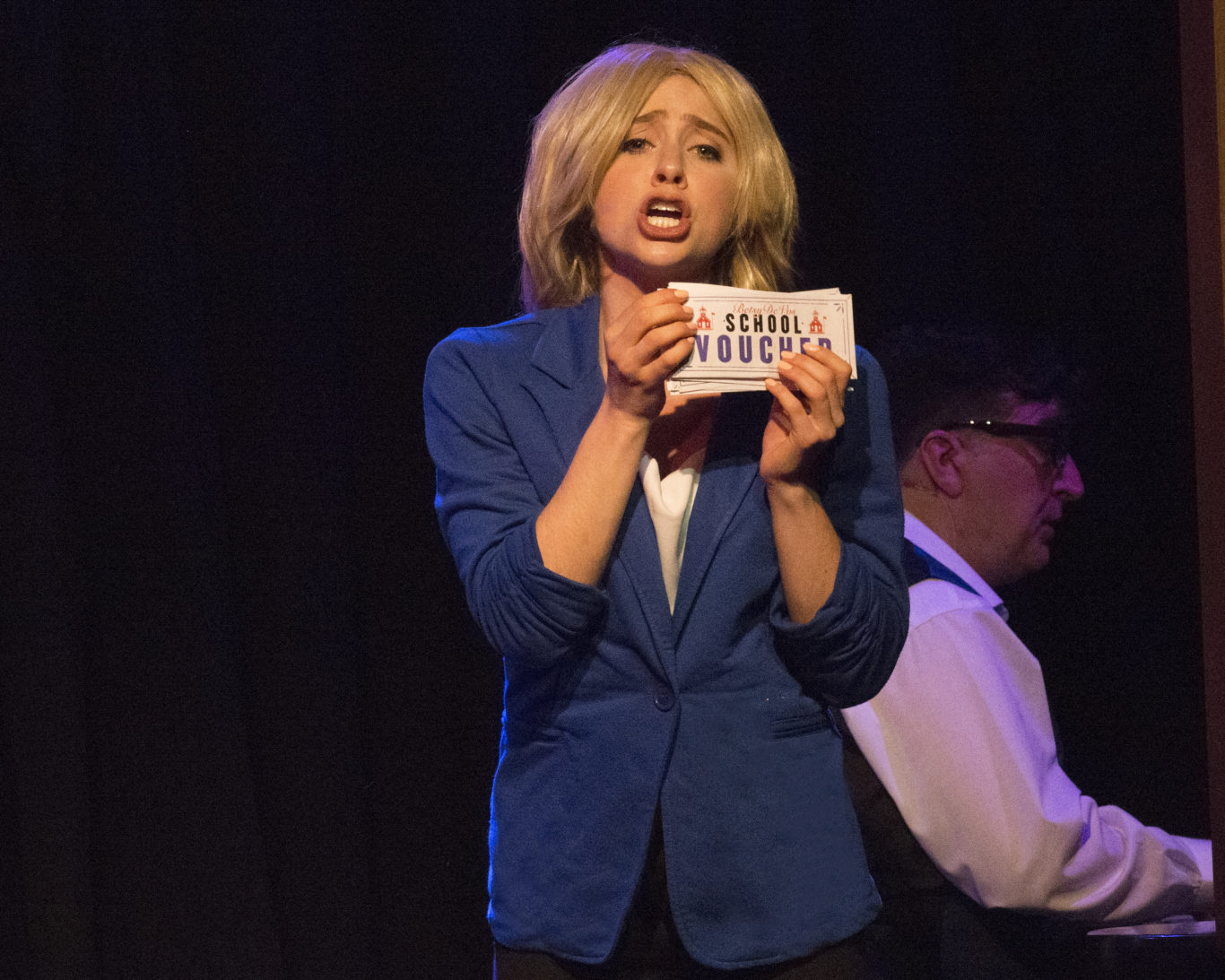 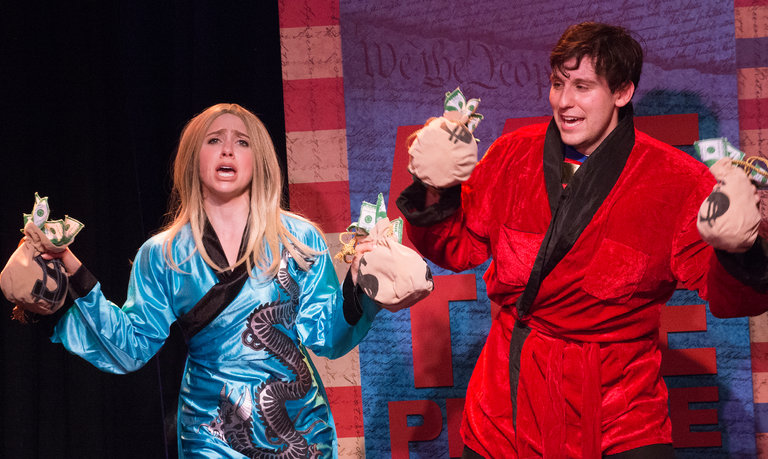 Ivanka and Jared at Home

During our annual visit in the Berkshires, Shelly and I have always looked for excellent theatre choices. We’ve attended Shakespeare and Company in Lenox and Barrington Stage in Pittsfield. This year, Barrington Stage featured a clever farce by Alan Ayckbourn, Taking Steps. The play is a classic exaggerated British physical comedy. Here’s some photos of Taking Steps: 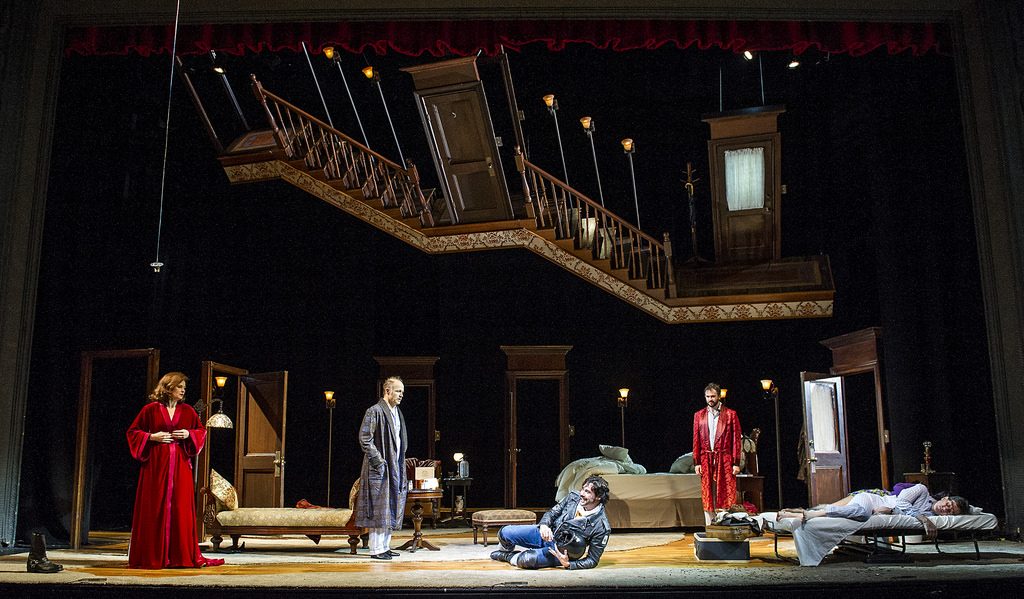 Some of the cast on the unique set of “Taking Steps”. 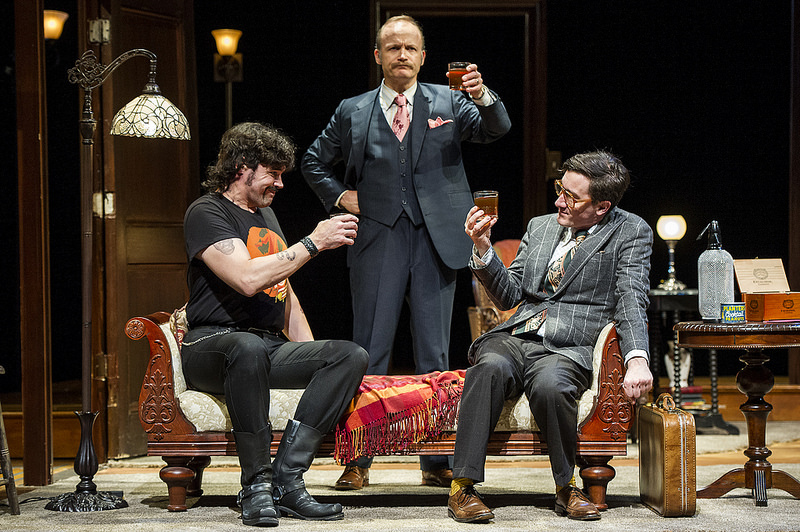 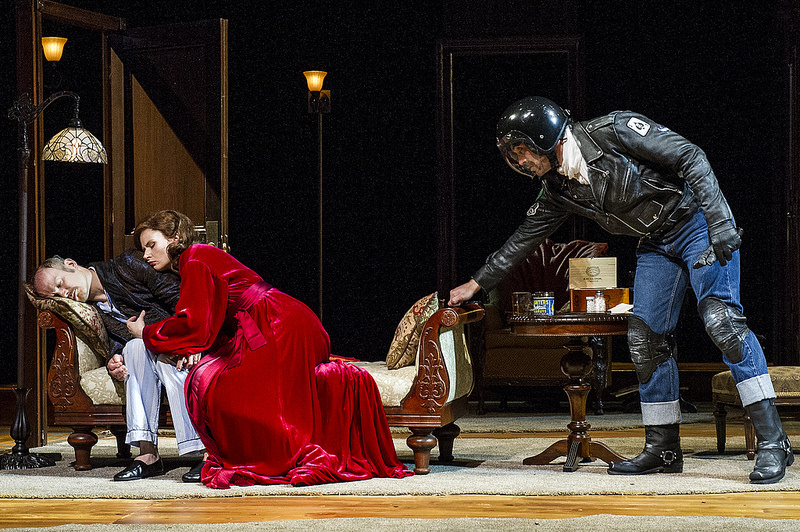 I also had the opportunity to visit with my old friend and colleague, Gypsy Snider, who is an original company member of San Francisco’s Pickle Family Circus and founder and Artistic Director of Montreal’s famed Seven Fingers of the Hand (Sept Doigts de la Main). We discussed her latest work and future projects, perhaps even with the new Big Apple Circus. Many of you might remember that Gypsy created all of the circus work for the brilliant Tony Award-winning Broadway revival of Pippin. 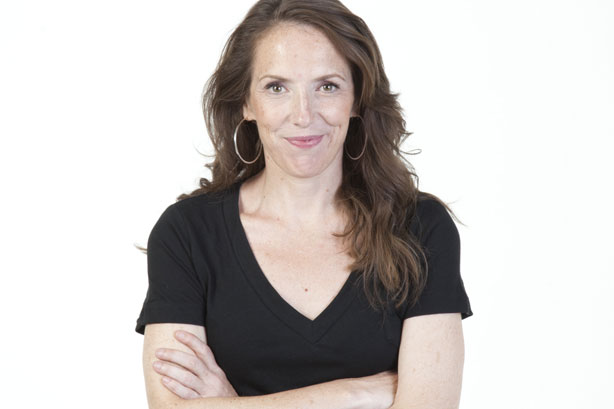 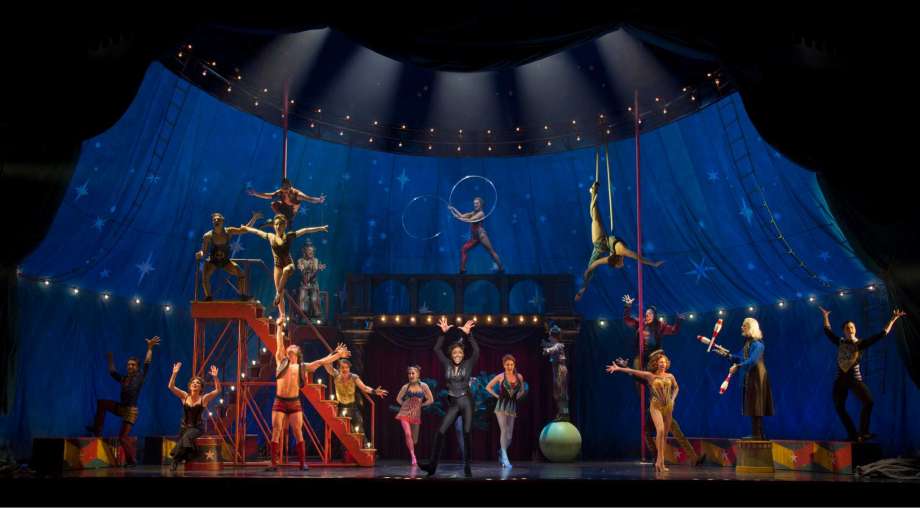 Here you can see a flavor of Gypsy’s circus creation in the Tony Award-winning Broadway revival of “Pippin”.

This year we didn’t have time to go to the Norman Rockwell Museum in Stockbridge, which is featuring iconic American images of Andy Warhol alongside Rockwell’s iconic images. We also didn’t have the chance to go to a wonderful dance concert at Jacob’s Pillow. If we can, we’ll return later this year for some of the wonderful events that the Berkshires offer. 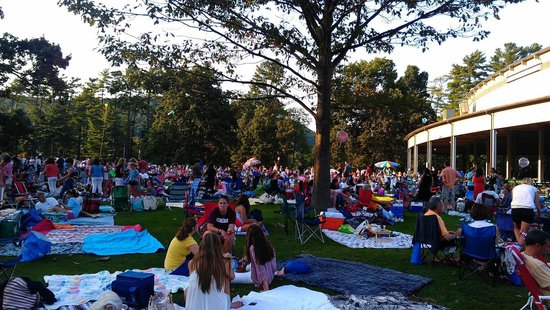 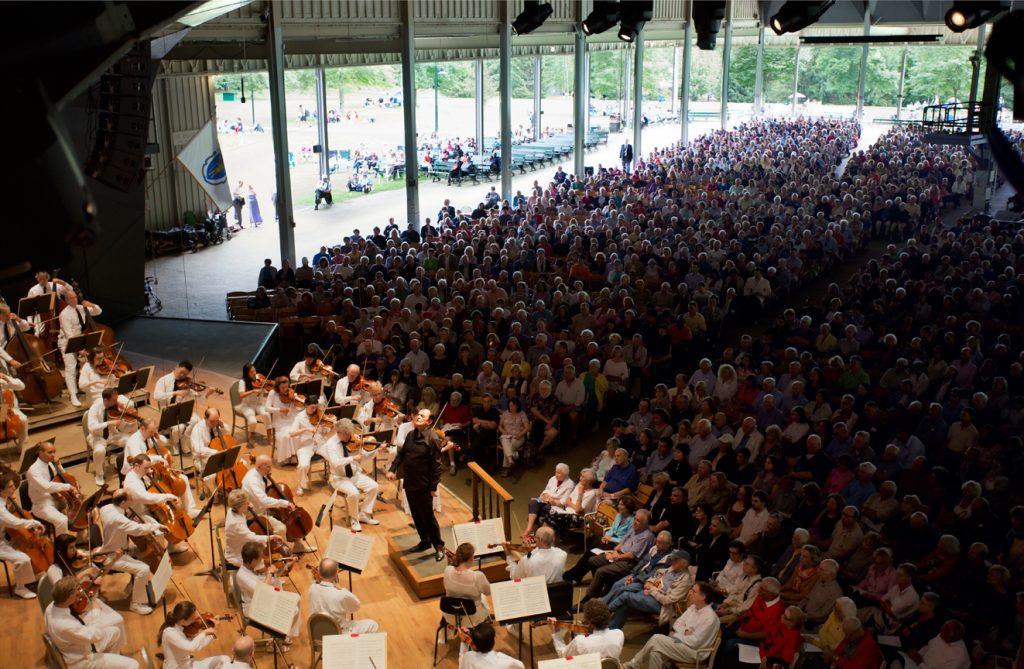 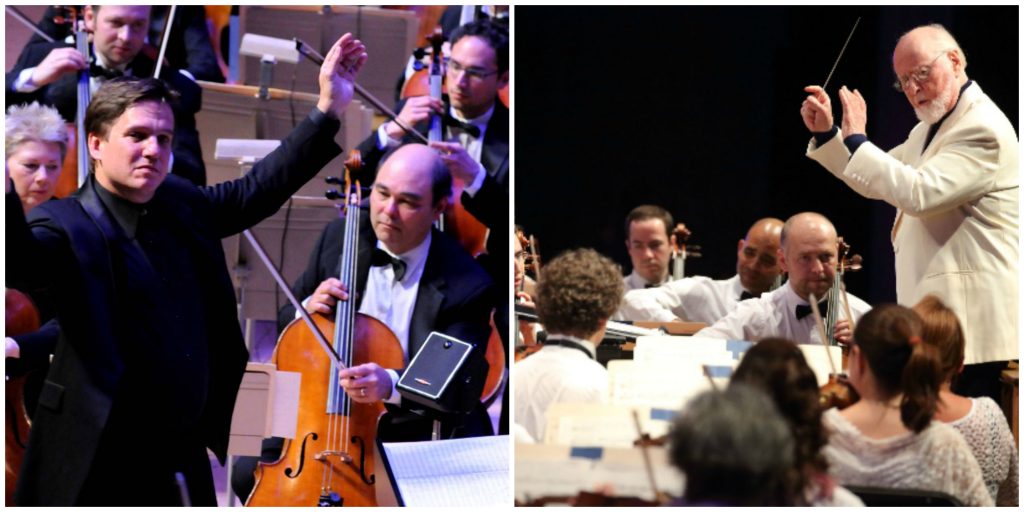 I spent this past weekend at Circus Flora in St. Louis. A simply lovely show, filled with special highlights, and outstanding performers. It was well worth the trip!

Here is the show statement from the Circus Flora program:

Imagine that you could travel through time. Would you go back to relive historic events? Would you try to change history?  What if you could alter the course of your own life?  Now imagine you had the grace, power, and beauty of an acrobat or an aerialist.  Circus Flora’s all new production will use the timeless art of circus to explore the fabric of time. 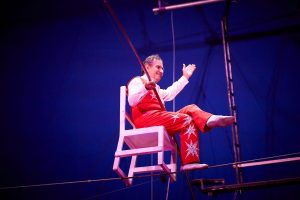 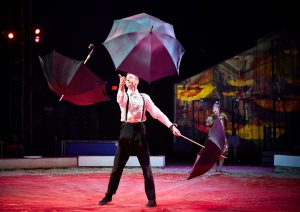 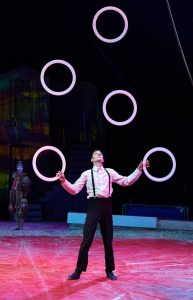 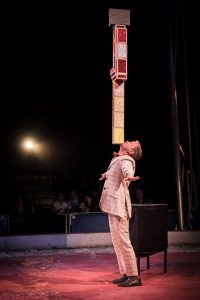 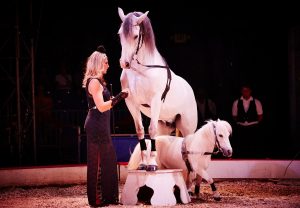 On the High Wire (sitting in the chair) is Tino Wallenda, patriarch of The Flying Wallendas. Walking on the High Wire with Tomas Wallenda Cortes on his shoulders is Alex Wallenda. The juggler with hoops and umbrellas is Kyle Driggs, who I first saw at the Paris circus festival, Festival du Cirque de Demain.  The juggler with the cigar boxes balanced on his chin is Adam Kuchler. The lady with the “Big and Little” horse act is Cassidy Herriot…she is a team with veteran horse trainer Heidi Herriot (her mom). 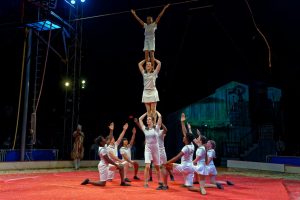 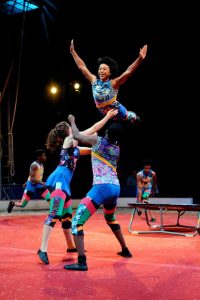 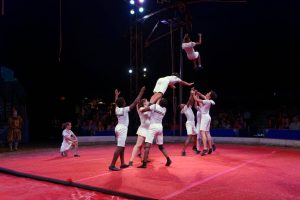 Featured annually in Circus Flora is the acrobatic team from Circus Harmony. The kids were remarkable as the dove into each others arms and even performed a “passing leap.” 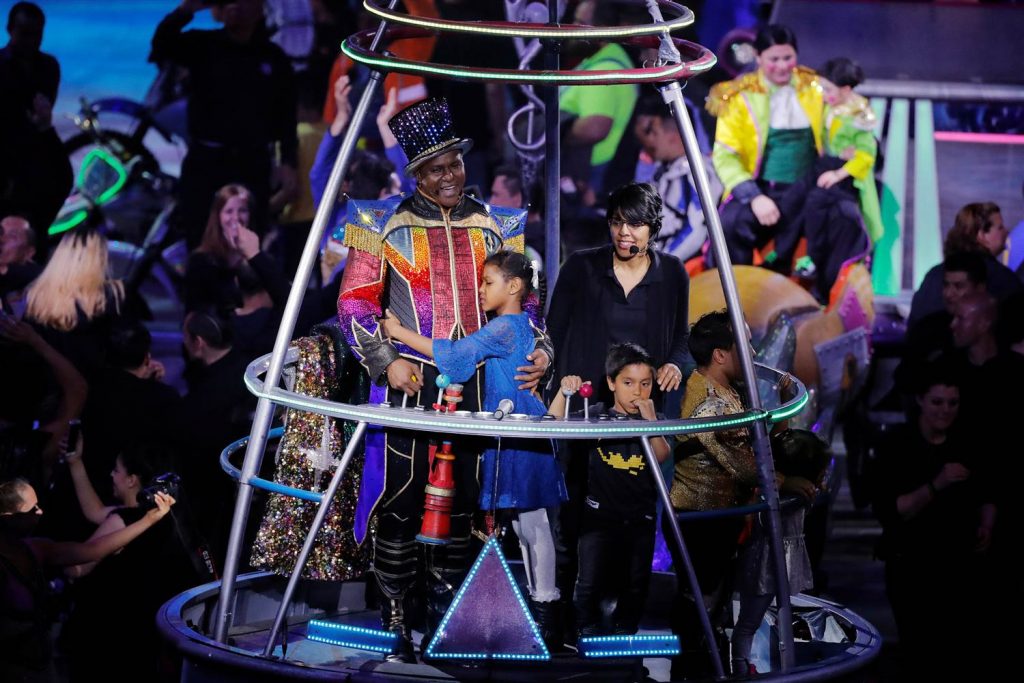 I want to share with you a fun evening I had on Saturday, May 13. Shelly and I went to see the Bindlestiff Family Cirkus presenting A Cardboard and Duck Tape Spectacular!. 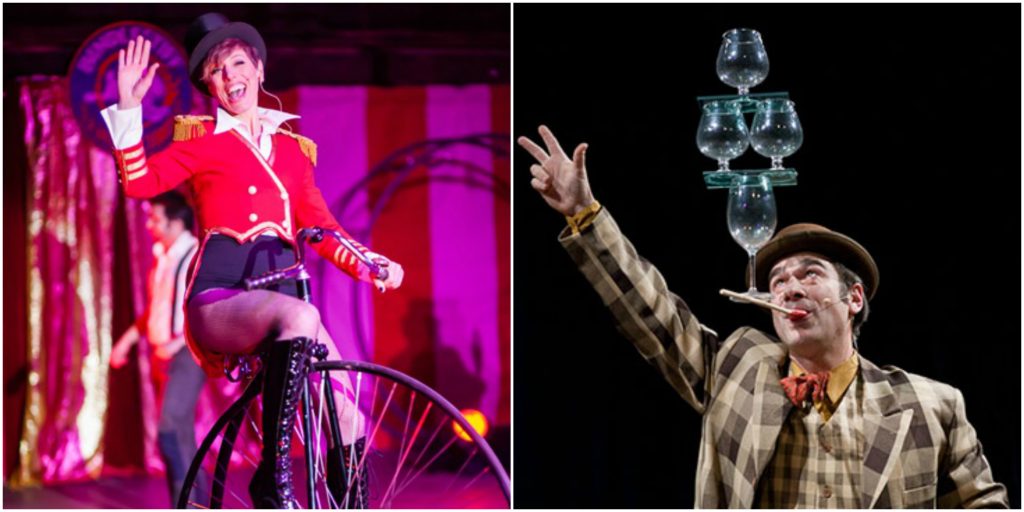 This is terrific live entertainment! There are no weak members of the cast. Stephanie Monseu is her usual dazzling self as emcee and juggler. Keith Nelson is a true burlesque top banana. Ekaterina Skmarina a goofy aerialist and floor gymnast. Ivory Fox a very clever acrobat capable of doing a variety of things, she has wonderfully graceful movement with a touch of comedy. Jared Kuchler is a multi-talented juggler, his specialty is a cigar box routine. 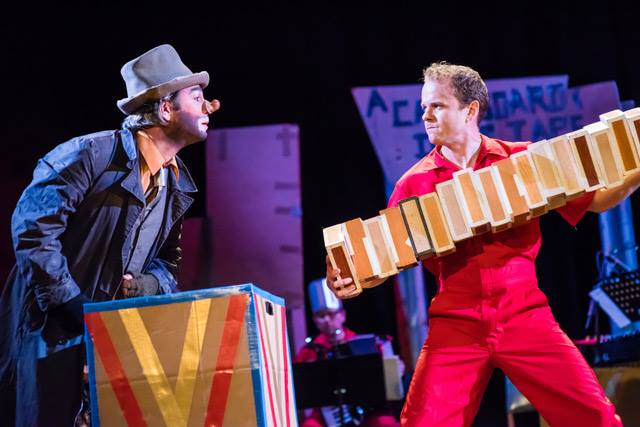 All of this accompanied by Peter Bufano’s original music on accordion, with Jeff Morris and Nate Tucker. The production was directed by our good friend Joel Jeske who will star in the upcoming Big Apple Circus.

So, if they’re ever in your town or mine, go see them!

It occurs to me that the only photo that we published in my post on Sunset Boulevard was the poster photo of Glenn Close. Of course she’s in makeup and wig to appear to be a “has-been” actress from silent movies. So I’m including two other photos of her out of costume. And, as a bonus, here’s one of her in costume and wig taking her finale  bow. If you hope to get to see the show, it’s a limited engagement, performing only until June 25th. 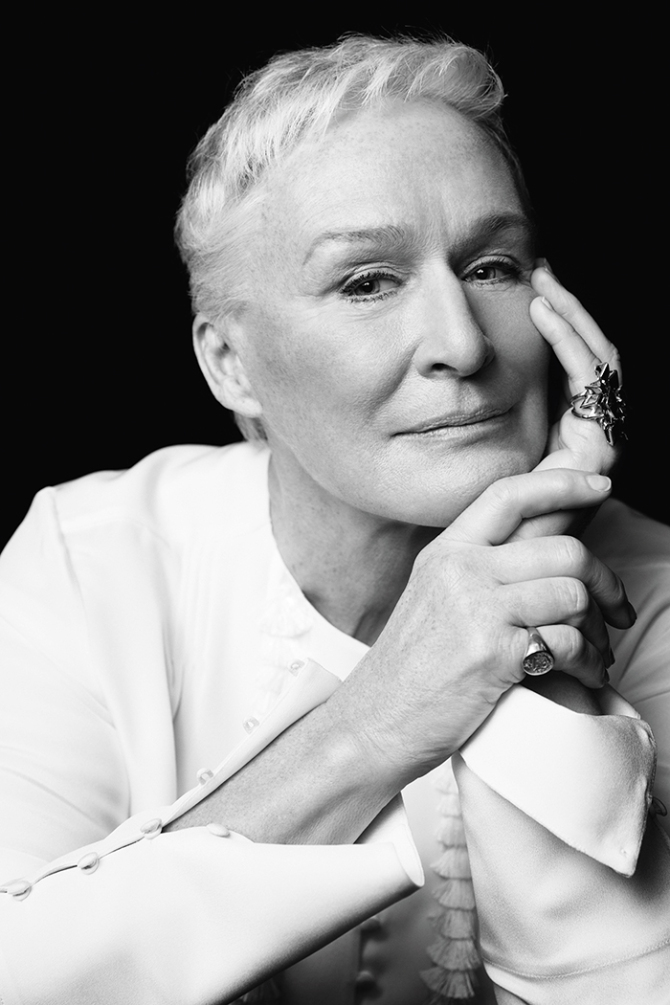 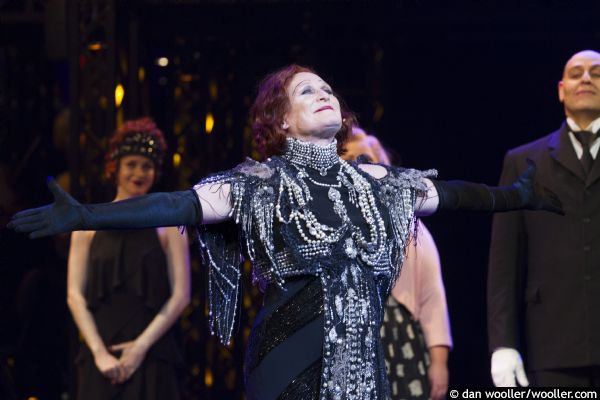 It’s been several weeks since I was able to post to this blog, but I’ve been very busy just trying to keep up with current developments. First of all, as I announced on my Facebook page, the auction that took place for the Big Apple Circus equipment, name, and trademarks was won by Compass Partners of Sarasota and New York City – Richard Perlman, Jim Price, Barry Salzman, Neil and Suzanne Kahanovitz, and Larry and Rita Solheim.

Here’s a big announcement from the new owners: they will open their first season on October 29 of this year. That will be a simply extraordinary accomplishment as there are enormous amounts of work to be done to get there. Let me give you a sense of what I mean: booking and contracting the artists and creative team, hiring the technical personnel, finding an appropriate rehearsal space, reconditioning the equipment, trucking and transportation, necessary visas, five weeks of rehearsal, and a unique nine day setup at Lincoln Center, just to name a few that come to mind.

And here’s the latest news: they are going to feature Nik Wallenda the Guinness World Record holding high wire walker. You probably remember that he walked on a tight wire across Niagara Falls and another over the Grand Canyon (nikwallenda.com). Both of these feats were telecast live on cable television and were extraordinary moments. I think this is a great start for the new producers and, once again, I wish them all the best in this incredible venture.

There will be an auction on February 7th for the physical assets and the trademarked name of the Big Apple Circus. This is very exciting for me personally, as it gives me hope that the Big Apple Circus could be revived under new management. No matter what, I’m excited to open this new chapter in the story of the BAC. Sharing some good memories with this photo of the BAC BIG TOP AT LINCOLN CENTER AT NIGHT – look for the two strings of lights on top of the tent. Photo of the Big Apple Circus at night, in the heart of Manhattan, at Lincoln Center by Michael LeClair c.1992. 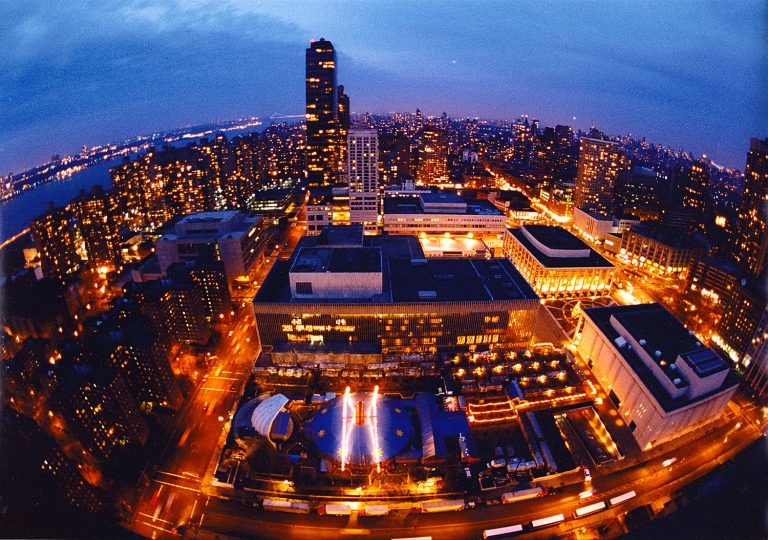