Almost two months ago, I was invited to a “dinner and going away party” for a couple of friends. Bradley Jones coordinated and would host the party in celebration of his colleague Donna, an eminent psychologist. Donna, who was retiring, was headed to California with her husband Don. The gathering was arranged so everyone could send them off with warm wishes. After dinner, there were to be tributes planned for Don and Donna: many shared thanks and reminiscing about old stories and times shared. I … had prepared a surprise.

A couple weeks before the party, Bradley (an eminent psychologist in his own right) sent me an e-mail asking if I thought he should have a pianist at the party. Bradley—in a former life—was in an original production of A Chorus Line on Broadway and he happens to have a baby grand piano in his Greenwich Village apartment, so I’ve come to expect some sort of music when I go to his parties. I told Bradley that of course there should be music, and he teasingly responded, “Fine, but only if you sing.” I jokingly retorted, “I only sing in the shower,” but Bradley cleverly offered, “I’ll supply the shower.” It seemed like I wasn’t going to get out of this one. 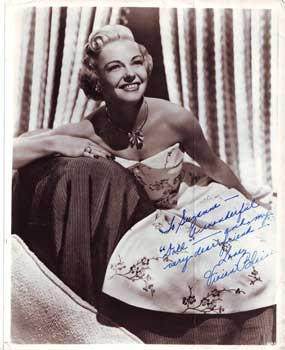 Vivian Blaine, the original Miss Adelaide in the Broadway, London, and film productions
Photo from the Suzanne Thierry archives

Bradley and I agreed that we could lead the entire room in a couple choruses of “California Here I Come” as a final send off, but I was going to have to sing something on my own as well. A couple days later I was sitting with the Lotos Club Theatre Round Table discussing what song I could sing. Someone suggested “Adelaide’s Lament” from Frank Loesser’s Guys and Dolls. I’ve always thought that “Adelaide’s Lament” is one of the cleverest Broadway showtunes ever written. The character of Miss Adelaide is a showgirl. Vivian Blaine originated the role on Broadway in 1950 and was so good she also starred in the 1955 film with Frank Sinatra and Marlon Brando. Gail VanVoorhis’s voice boomed from across the room, “You absolutely must do that song.” Fellow member Gloria Shafer even agreed to help me practice.

So, the program was set. I would sing “Adelaide’s Lament.” Bradley decided he could perform the song “Very Soft Shoes” from the show Once Upon a Mattress, and together we settled on the duet “Brush Up Your Shakespeare” from Cole Porter’s Kiss Me Kate. It’s a great song with lots of revery (and more than a couple of hilarious puns).

However, I still wasn’t sure how to introduce “Adelaide’s Lament” as a tribute. Bradley asked, “Do you want to do the number in drag?” “No,” I said, “I’m sure there’s another way to present the song where I can still perform in Adelaide’s voice.” By the way, the room was FULL of psychoanalysts because they were all Donna’s friends and colleagues. When I rehearsed with Bradley’s brilliant accompanist, Dennis Buck, he had a fantastic idea to incorporate the idea of psychology into the performance. 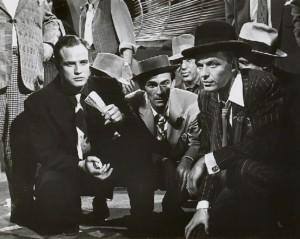 In introducing the song, I made up a story about how Donna had told me about a patient–who we would call “Adelaide”—who had turned to psychology for help after her fiancé of fourteen years–who we would call “Nathan”—was an inveterate gambler and refused to set a wedding date. I performed half the song as a psychoanalyst giving Adelaide advice (which I pretended to read from Donna’s own published psychology book), and then I slipped into Adelaide’s voice to respond (having been born and raised in Flatbush, I’m well versed in Brooklyn-tinged patois).

Well … Don and Donna had a terrific time at the party, and “Adelaide’s Lament” was a real crowd pleaser. And for me it was a dream come true. I finally got to sing a Broadway showtune for an appreciative audience!!!

Gloria Shafer has already talked to me about performing for the annual show “Lotos Got Talent.” I’d be excited to work again with the terrific accompanist Dennis, who not only gave me some great musical training but who also beautifully adapted to the surprises of a live performance. 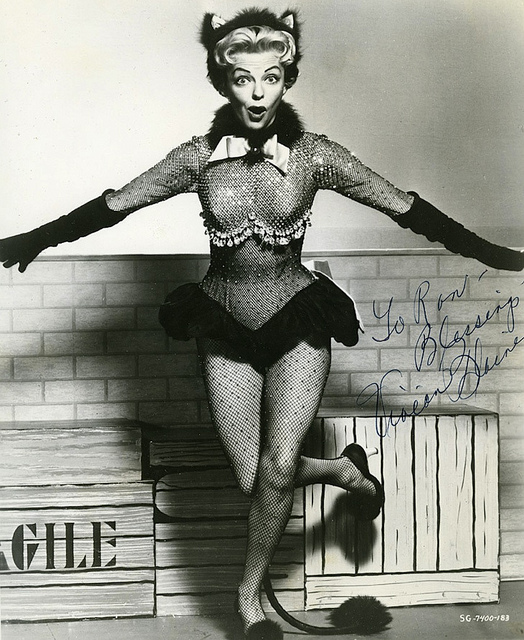 Vivian Blaine from the 1955 film “Guys and Dolls” in her alley cat costume for the number “Pet Me, Poppa”

One Response to “Performing Showtunes”