The front page article of the Metropolitan section of the New York Times on Sunday, June 5 was an article by columnist Ginia Bellafante titled “Can the Big Apple Circus Be Saved.” (Click here to read the column.)

In her column, Ms. Bellafante refers to a bagel advertisement that I showed her during a meeting at the Big Apple Circus offices. As word about the bagel ad got out before the advertisement itself, I wanted you all to have an opportunity to see it. Here it is:

What’s the price of a bagel got to do with saving the
Big Apple Circus? 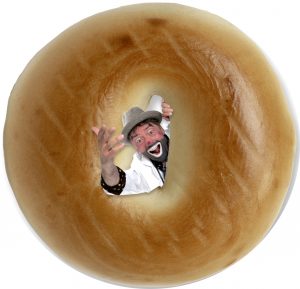 Today our average ticket is $50. By bagel math, it should have risen to $118. Our performers soar, but our prices don’t. That’s part of our mission as a not-for-profit arts organization. On the quiet side we are deeply engaged in raising the spirits of hospitalized children with our heralded Clown Care program.

Our 2015/16 show got rave reviews. It was a New York Times critic’s pick and played to over 200,000 people. In popcorn numbers, that’s 9 bazillion kerneIs. In dollars though, that’s not enough.

After many years of balanced books, the 2008/9 financial crisis hit. Suddenly big companies canceled private parties with us––let’s just say the optics of throwing a lavish holiday party in the midst of crashing markets would rival a solo performance by Nero on violin. Then a blizzard in 2011 and a massive hurricane in 2012 nearly blew us away. We were too slow to react.

We need $2 million or we’re toast.

Okay, mea culpa, but a major plan is now in place to right our valiant ship and sail into the future. But we need $2 million to open our new show at Lincoln Center and remain one of New York’s treasures. That’s a lot of bagels.

If everyone who reads this ad donates $25 we’d be saved. There are more urgent causes that deserve your generosity, but none that give more joy. Please help preserve one of the most wonderful experiences of your life for yourself, your children, and your grandchildren.

Please consider contributing online at www.SaveTheCircus.org.
And please share this important message with your family and friends.

One Response to “What’s the price of a bagel got to do with saving the Big Apple Circus?”