So, we were still at the bush camp, but we hadn’t seen any lions yet. Our guide, Kanga, was scheduled to drive us to the next camp the following morning. He suggested that we wake up very early (a suggestion that was never my favorite) and, instead of driving directly to camp, we would see if we could track some lions.

Now, get the picture: there are four of us in the Range Rover—Kanga (our guide), Stuart (our tracker), Shelley, and me. We would drive a bit, then stop and look around. Every twenty minutes or so Stuart would say about four syllables in his tribal tongue. Kanga would translate, “Stuart says to look out there, he sees an encouraging sign.”

He gestured toward some circling vultures. We drove in that direction and they looked around (as always for footprints and droppings) and Stuart got excited when he thought there might be lions nearby. Again, the pukus sounded the alarm (Stuart, with ears that could hear the sound of a gnat’s wings at 50 yards) told us that we were close, and sure enough, after crossing a water-filled ravine, he spotted a lioness on the shady side of a bush. 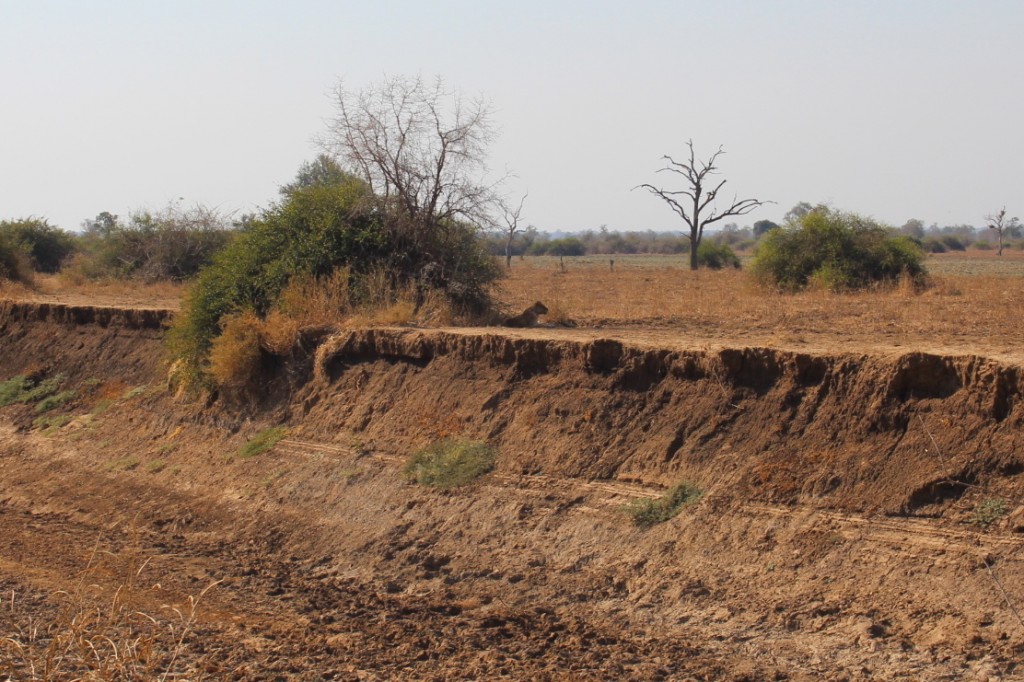 Her muzzle was a little red—the sure sign that there’d been a recent kill. We followed along on the opposite side of the ravine, and suddenly Stuart pointed to a breeding pair, a young male and a seemingly undernourished female. 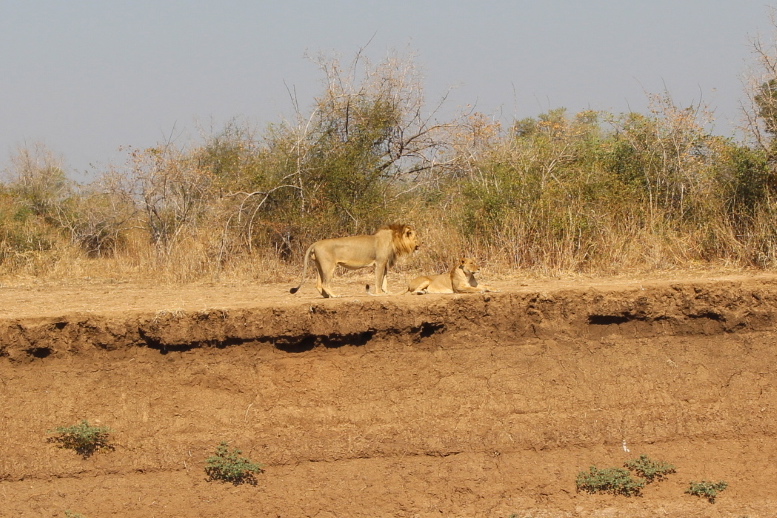 Kanga explained that when breeding, lions don’t eat, and from the look of her they had several days of hunger pangs.

I hasten to add that she clearly had had enough of his amorous gestures. 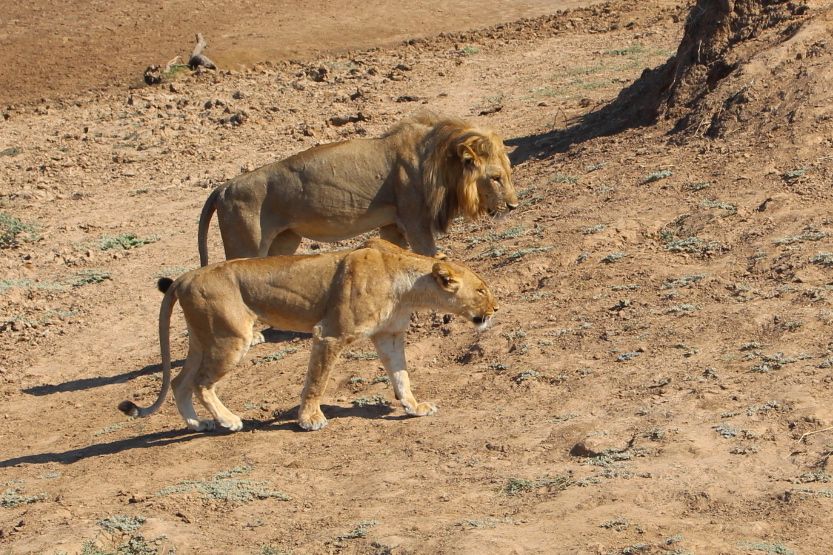 We noticed another lioness with a medium-sized cub and watched as she walked around a large bush. 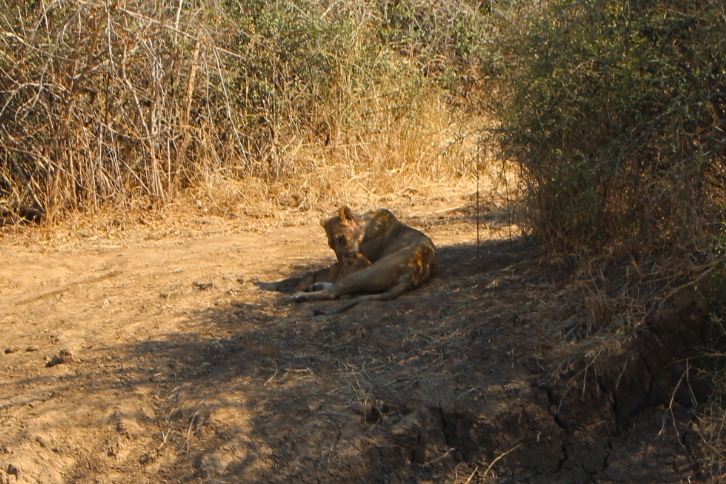 We traveled around the bush in the opposite direction, and what we encountered was a stunning sight: three lionesses with nine suckling cubs of varying sizes. 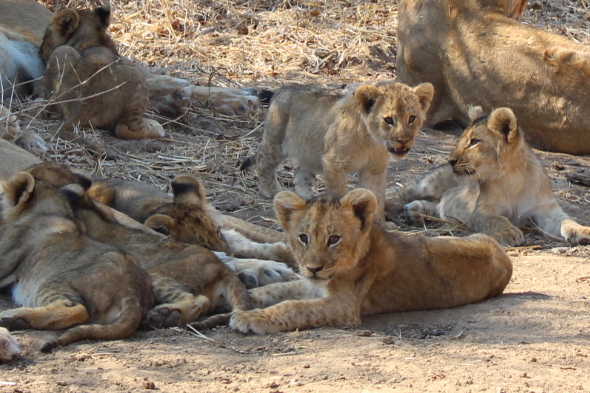 Kanga told us that any of the cubs could nurse from any of the females. Here’s a photo of the male and female breeding pair arriving and completing the pride. 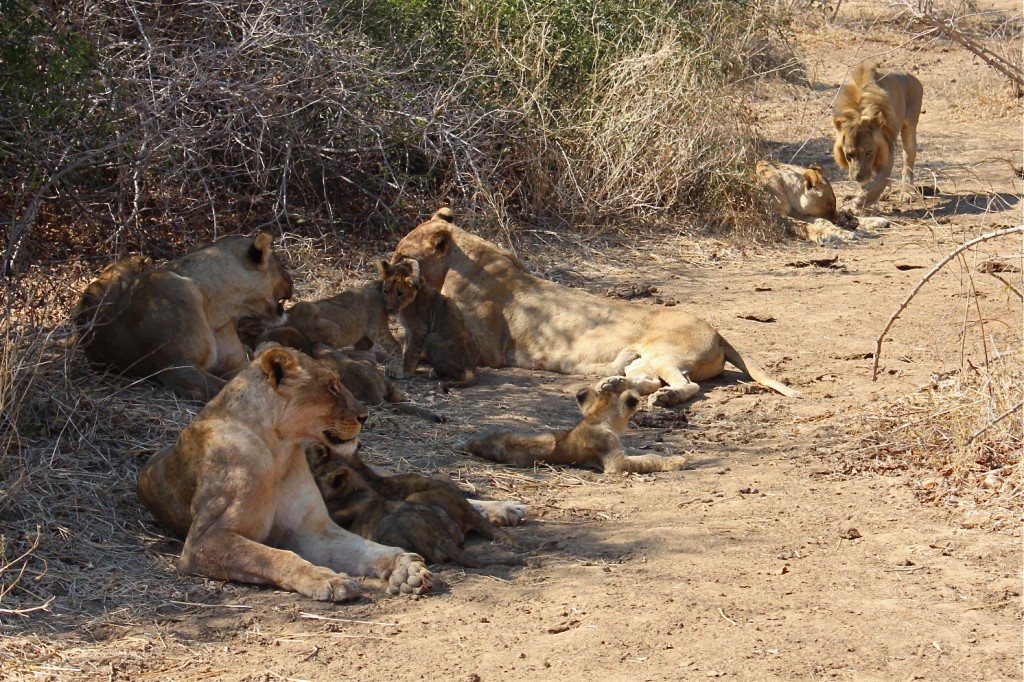 Kanga guessed that the male was about five years old and mentioned that he had recently seen a second pride led by what he took to be that lion’s brother. We sat in the Range Rover for about 25 minutes awestruck by the sight before we drove on to the next camp.