Daniel Cyr is a master acrobat and circus performer. He invented and popularized an apparatus called the “Cyr Wheel” after debuting it in 2003 at the “Festival Mondial du Cirque de Demain” in Paris (for which he won the Silver Medal). The Cyr wheel is a single, large, metal hoop inside which the acrobat stands, in a manner resembling Da Vinci’s “Man.” 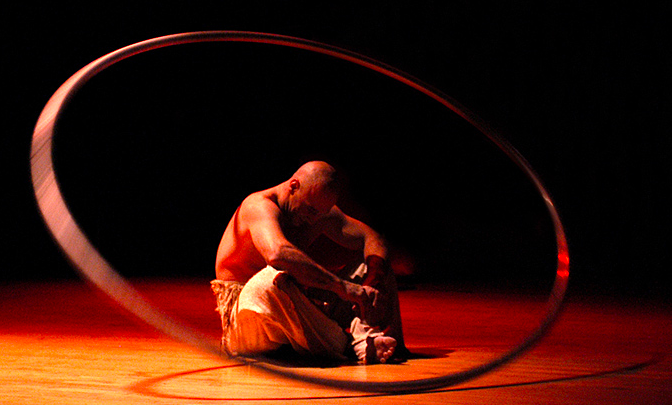 The wheel then does what wheels do – it rolls around the ring with the performer inside.

Today, the wheel is an act being done around the world by some 200 circus artists. It’s a big-time crowd-pleaser!

Daniel is also a master at the Free Ladder, which he performs with graceful precision in Big Apple Circus’ current show, Luminocity.

I first met Daniel back in Montreal in 1993 when Cirque Eloize was new – a completely fresh and unique stage show. Daniel reminded me recently that I saw him perform his Free Ladder in that terrific performance.  Since then, I’ve been a huge fan of his work.

By the way, sharp-eyed circus aficionados will delight in seeing Daniel as the “spotter” in the Mongolian Angels aerial act – both standing underneath the trapeze and holding their safety line while they do amazing tricks high in the air. The Big Apple Circus Artistic Director, Guillaume Dufresnoy, has enormous confidence in this circus veteran to give him such a big responsibility.

You’ve got to catch Daniel doing his amazing stunts in Big Apple Circus’ Luminocity.  The show is at Lincoln Center through January 12 and tickets are still available.  Get ‘em (by clicking here) while they last!

On a side note, this will most likely be my last blog post of 2013. Reflecting back, it’s been quite an exciting year. I finally completed my memoir Never Quote The Weather to A Sea Lion and other uncommon tales from the founder of the Big Apple Circus. Promoting a book is no easy task, so I want to thank you all – my readers, friends, family, and colleagues – who’ve supported me in this endeavor. AND thanks to super actress Glenn Close, who wrote the Foreword. Here’s to many more great years, and here’s to a whole new memoir’s worth of great stories.

Warmest greetings of the most joyous season and happy new year!

One Response to “Daniel Cyr in Luminocity & end-of-year report…”