Last night I had the honor of making a tribute to Michael Christensen at the annual Big Apple Circus Gala. Here’s what I said in the ring:

This wonderful organization had humble beginnings. Michael created a juggling act that included me. So we packed our bag and took it on the road… literally. We became street artists, traveling across two continents from San Francisco to Istanbul.  In that bag were balls, clubs, hats, some stupid shoes and Leonard the Rubber Chicken. 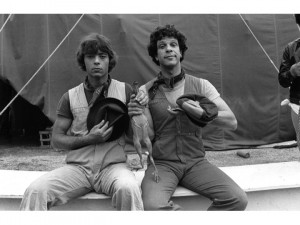 Yes, Leonard was a full and equal partner.

Leonard also wrote some rubber checks, ‘til we learned how to juggle the books. But I digress…

Working on the streets of the world often led to encountering the local constabulary wherever we traveled. Fast forward – we finally made it to the BIG Time, the BIG Apple, and we set up our first BIG Top – hmm, am I sensing a pattern here? – on the landfill that eventually became Battery Park City. There we had the opportunity to meet New York’s Finest…Bill De Blasio, are you listening?

Early in that first run, after a glowing review in the New York Post that included a reference to the “Chicken Jugglers” Paul and Michael, I was out front near the box office when a New York City Police Car came rolling up. On it was emblazoned Humane Law Enforcement Division.

‘Hmm,’ I thought to myself. ‘There’s an entire division devoted to enforcing the law humanely? Are these the guys who put their hand on the top of the perp’s head so he or she won’t bonk it on their way into the backseat of the cop car?’

“What can I do for you officer?”

New York Post in hand, he demanded to see the “Chicken Jugglers” Michael and Paul.

“I’m Paul. Michael’s around back. What’s this all about?”

“Bring us to him,” was his answer.

So I walked around to the back of the tent, where Michael was enjoying the sunshine. His eyes grew very wide as I fingered him, pointing. “That’s Michael.”

“There’s only one,” said Michael.

Michael opened the suitcase with all our equipment in it. There lay Leonard on top, his eyes closed, as was his custom.

So here’s to our sleeping partner, Leonard. And here’s to you, Michael, humane partner, colleague, mentor, and friend.