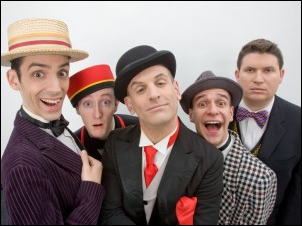 Last night I had the enormous pleasure of being the guest of honor at “An Intimate Evening with Paul Binder” at the home of a Parallel Exit board member. Parallel Exit is a Drama Desk Award-nominated physical theater company in the great tradition of Chaplin, Keaton and Harold Lloyd. Last night’s event, a fundraiser for the company, was hosted by company Artistic Director Mark Lonergan. I told some colorful stories from my memoir Never Quote the Weather to a Sea Lion (and other uncommon tales from the founder of the Big Apple Circus) and stuck around for a long Q&A moderated by Lonergan that could have gone on well into the night. It was truly a treat to speak with Parallel Exit fans and board members. Having an audience which included a group of physical comedians made it a gas. Was it fun for all? There’s an old vaudeville adage that I often strive to live by, and it’s certainly a part of the Parallel Exit mission, and that adage was in full effect last night: always leave ‘em laughing.