One of my greatest joys as a performer in the Big Apple Circus was being able to experience the audience’s reaction. Whether it’s seeing the excitement of a clown moment light up a child’s eyes, or hearing a great big roar of laughter from the crowd, I’ve always found immeasurable happiness in those moments. Around thirty years ago, after many years in the ring, it occurred to me that there were some folks whose visual and hearing impairments were preventing them from experiencing the enchantment of the circus. Along with our Founding Chairman, Alan Slifka, I decided to do something about it.

Circus of the Senses premiered in 1987. It serves hearing- and sight-impaired people. We set out to create a show that everyone, regardless of physical ability, can enjoy.  American Sign Language interpreters are placed throughout the ring, in order to sign what some audience members can’t hear. We distribute large-print or Braille programs which describe the various acts in detail. We also have headsets for visually impaired audience members, where they listen to a play-by-play description of the acts in real time while hearing the music, announcements and ring sounds like hoof beats. 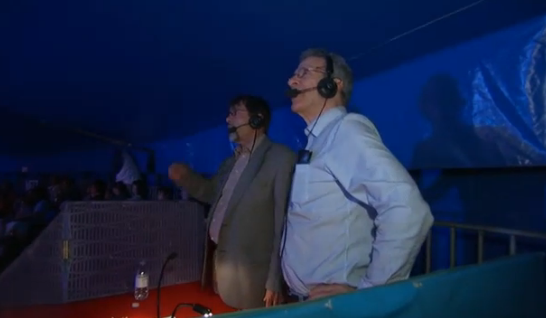 Paul Binder and Michael Christensen at Circus of the Senses

I am proud to say that I am always the one behind the mic, describing each of the acts in detail as they happen, with Michael Christensen as my co-narrator. The very first time we premiered Circus of the Senses I had the pleasure of partnering with the legendary sportscaster Marty Glickman, one of my childhood heros (and also the subject of a recent hour-long HBO Documentary). His uncanny voice was perfectly suited to the task, and it was an experience I’ll never forget.

After each performance, visually impaired kids get to come into the ring for a “touch session.” They speak to the performers as they touch costumes and animals and props. They even get to swing on trapezes. 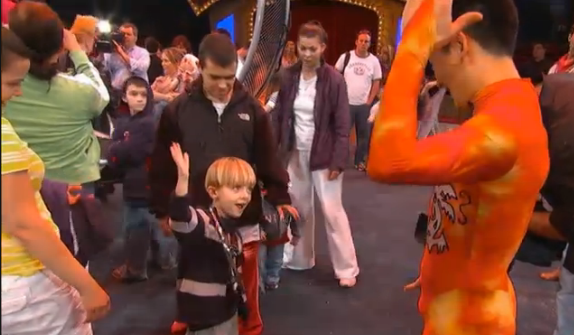 I’m happy to report that I have never once missed a Circus of the Senses performance. This past Thursday, October 3, I went to Dulles, Virginia, where I narrated the performance with Bill Boots from our Clown Care Unit (substituting for Michael). I can honestly say that Circus of the Senses is probably the most gratifying aspect of my involvement with Big Apple Circus. To be told by a visually impaired kid that they “saw” the horses galloping around the ring, and to know that if even for just a few moments, they left behind the everyday world and just enjoyed the circus… for that, I feel incredibly grateful.

One Response to “Circus of the Senses”