John Ringling’s vast fortune was made as a real estate developer. He was the major force in creating the city of Sarasota, Florida, which was the location of the winter quarters of his circus. And, although it’s long since moved on, to this day Sarasota is known as “Circus City.” 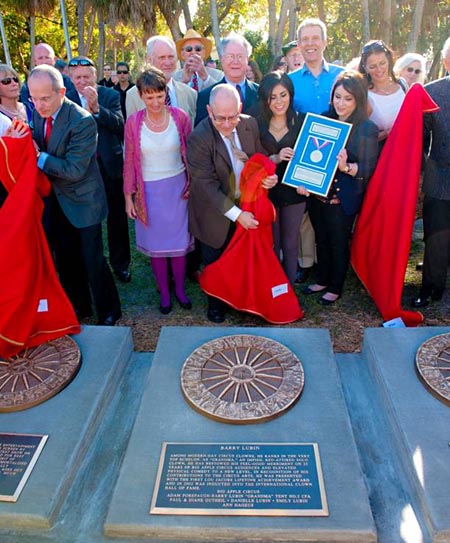 Barry uncovers his plaque on the Ring of Fame

Drive west from downtown Sarasota across the bay on a bridge and along several miles of causeway and you’ll arrive at St. Armand’s Key.  In the center of the Key, there is a very large traffic circle that forms a park, with expansively beautiful palm and bay trees inside its perimeter. It is there, each year, that several greats of the American Circus are inducted into the Ring of Fame.  Brass plaques celebrating these celebrities are imbedded in concrete and encircle the park   On January 15, this year’s inductees included Cecil B. DeMille, Joseph Bauer Senior, Hans Wynn and “Grandma,” Barry Lubin. I simply had to be there for Barry’s induction.

The temperature was a perfect 72 degrees as emcee Chuck Sidlow, himself a clown, opened the ceremonies.  Bello Nock, his hair at full staff, welcomed the returning inductees from across several decades and put in a plug for his thoughts on future winners.  Kenneth Feld accepted on behalf of the DeMille family.

Barry’s acceptance speech was filled with smiles and laughs and tears as he recalled his childhood (born in Ventnor N.J. next door to Atlantic City) his career (“Grandma is a tribute to my grandmothers and the old ladies I saw, daily, on the boardwalk.”) his family (“my two wonderful and patient daughters who had a clown for a father”) and his new life in Sweden with companion Ann Hageus (“in Sweden my radio sounds funny”).

I felt deeply touched when he recounted “Grandma’s” more than 30 years entertaining audiences at the Big Apple Circus. We were all honored for all of his dedication.

It was a glorious day.

A) Paul, Ann & Barry; B) Paul, Bello, Barry & Kenneth Feld from Ringling Bros. to the right; C) Paul and Barry with his Ring of Fame plaque.