My mother loved a parade!  She specifically loved the Macy’s Thanksgiving Day Parade, which has been a NYC institution since 1924.

In 1946, one month after my fourth birthday, my mother put a nickel in the subway turnstile, I walked under it and we traveled from our home in Brooklyn to Manhattan to see the parade — and to this day, I still remember my head swimming with excitement as we rode the subway to the parade route. By the time we arrived, the crowd was at least five deep and impossible for a four-year-old who fit under the turnstile to see what was happening.  Undaunted, my Brooklyn mother had an inspiration and turned to the tallest man she could find in the crowd, a perfect stranger, and asked if her son could sit on his shoulders.  What a wonderful man, I must have ridden on his shoulders for more than an hour that day. The parade was so exhilarating, for years, I could name — in order of appearance, every band and balloon character I saw that day. 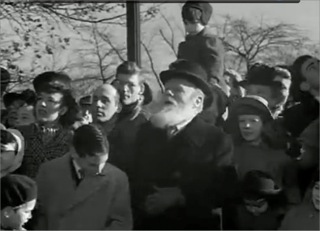 Screen-grab from Miracle on 34th Street: Edmund Gwenn, a.k.a. Kris Kringle in beard and hat; Paul Binder, above.

Six months later, I went to the Loews 46th Street Theater in Brooklyn — the locals call it da Low eez — with my mother and my sister to see the movie Miracle On 34th Street, starring Maureen O’Hara, John Payne, Edmund Gwenn, and a seven year old Natalie Wood. The movie had scarcely begun when my mother shot-up out of her seat, pointed at the screen and shouted, “Its Paul! That’s my boy Paul!”
And, sure enough, there I was, at the parade, on the shoulders of that wonderful stranger, preserved for the ages in film history.

The fella in the front is the star of the film Edmund Gwenn, Kris Kringle. The kid up above him, with the ear flaps?  Me.  Looking back, not realizing it then, show business, or more specifically, the business of people was my destiny. 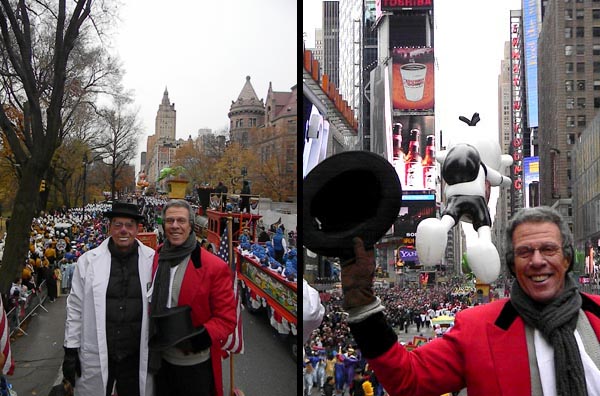 2011 Thanksgiving Day Parade: Paul with some of the “Dream Big” cast. On the wagon, left to right, Jenny Vidbel, Jenna Robinson, and Muriel Bruggeman. The wagon is supplied by the Circus World Museum in Baraboo Wisconsin as an authentic Bandwagon, circa 1903, and drawn by 6 percheron horses form upstate NY.