This past Wednesday night, I had the great pleasure of attending the Tony nominated musical, Dear Evan Hansen. It was an outstanding evening of theatre.

How can I convey how unusual this show is? Let’s start with the simplest element, the costumes. They are contemporary. The characters you see on stage, could just as easily be seen walking down the street. The set and lighting are clearly married as one element. We see moving projections on screens (which are, sometimes, also moving) completely evoking the internet and social media. But, I’m not doing justice to how these visual elements effect our view as an audience. A good deal of the time, what we see on stage is very cold and alienating. BUT then, the characters on stage are emotionally rich, in contrast to their “stage” environment. Perhaps you can understand that from the photo (below).

The music is contemporary, played by a small orchestra creating songs sung by actors on stage with excellent voices. Particularly, the title character, Evan Hansen, is brilliantly portrayed by 24-year-old Tony award-nominated, Ben Platt. He is Evan Hansen, totally inhabiting the character. He actually sweeps us up into the emotional rollercoaster that Evan Hansen is going through. Whew! 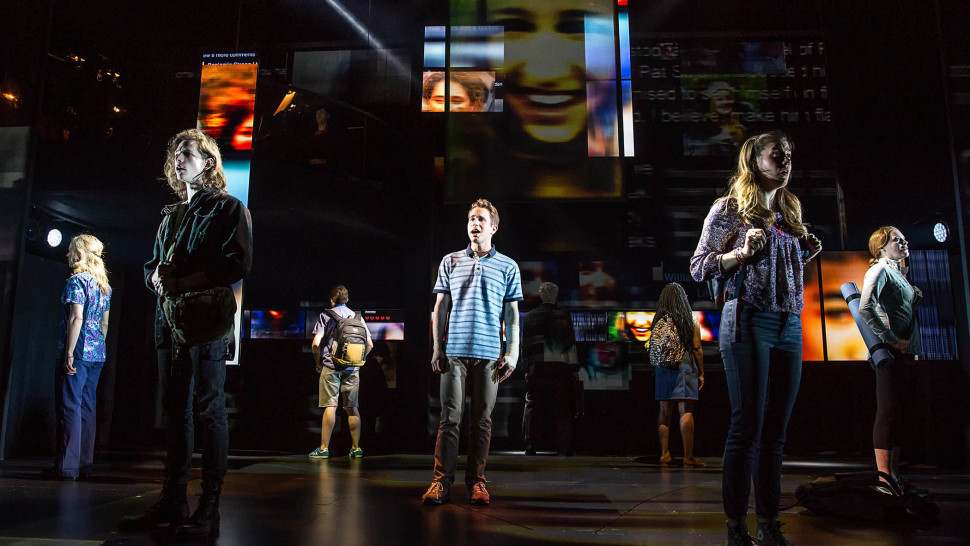 The cast of “Dear Evan Hansen” with Ben Platt center.

This is an extraordinarily difficult ticket to get on Broadway, but if you can find a way, it’s absolutely worth seeing!