I am happy to report that I made it back from my African safari in one piece. One WHOLE piece. First Shelley and I spent five days in Cape Town where she taught three classes and I paid a visit to the Zip Zap Circus School. Then we left South Africa for Zambia and our 8-day African safari, including two days in a tent at a bush camp. We saw some incredible animals and spectacular sights, and I surprised myself by being able to take some half-way decent photographs. In fact, I got amazing shots of a pair of leopards, a herd of zebra, several giraffes and baboon families, scores of hippos, plenty of impala, and lots of puku, kudu, and doodoo. And I say with pride that I have several shots of a group of lions. But I’m getting ahead of myself. Because there is so much from this trip that I want to share with you, I’ll do it in several posts over the next few weeks.

I want to begin with one unforgettable experience.

We landed in a one-strip airport near a village called Mfuwe, then drove about three-quarters of an hour into the Zambian wild along the Luangwa River. We stayed in three different camps as we traveled around seeing the wildlife. We knew that we were on safari to see animals, but what we didn’t expect was that the animals would come to see us.

The first place we stayed was called the Nsefu Camp. Shelley and I had our own rondavel in the camp. From its deck, we had a clear view of the river. Lo and behold, in the afternoon of our first full day in Zambia, we were greeted in our camp by elephants—two females with their calves. I grabbed the camera and got a great shot of Shelley with an elephant in the distance walking towards her. 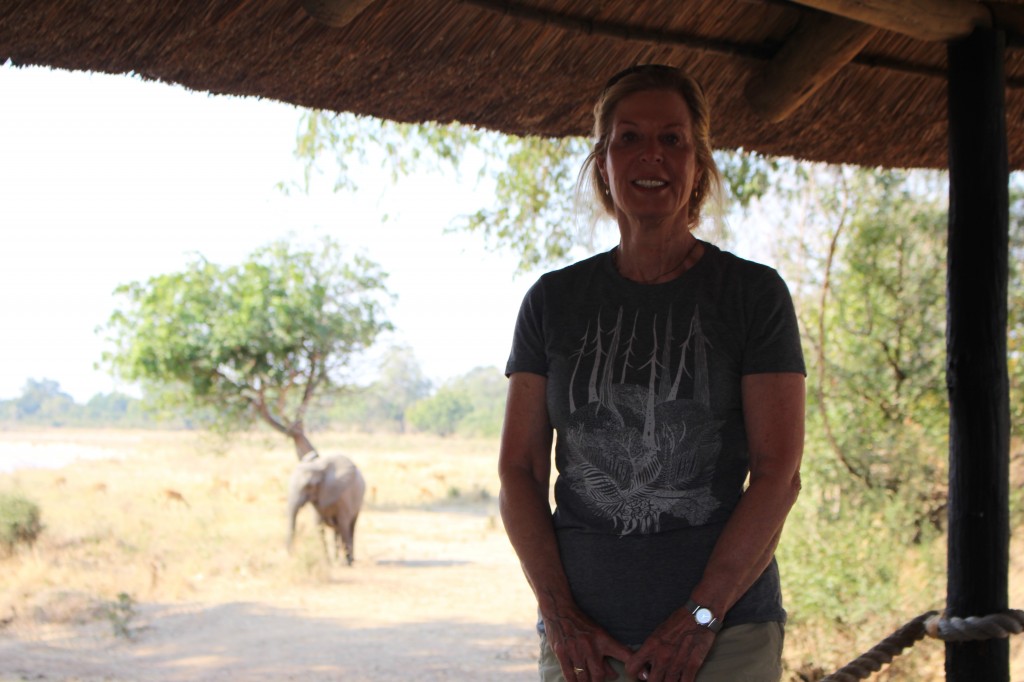 When else are you going to get to be in a photograph with an elephant in the wild? I was surprised at just how close they came to us. They walked into the camp feasting on the leaves of several trees. At one point one of the calves approached a hut, practically walking up the steps. 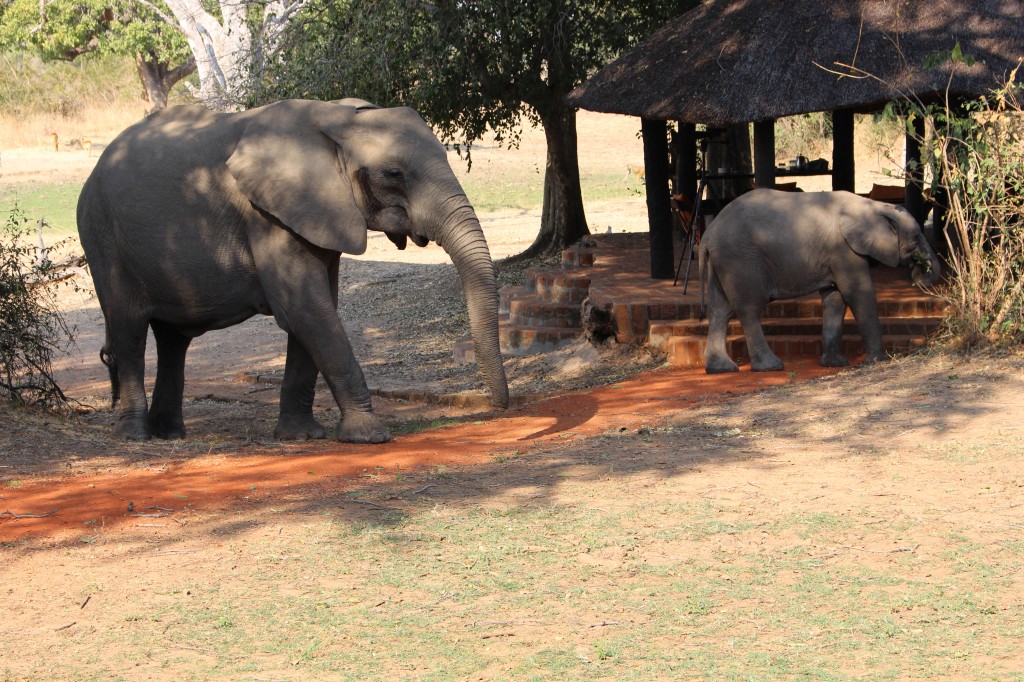 And as you can see, one of the mothers was about twenty-five feet away as I took her picture. 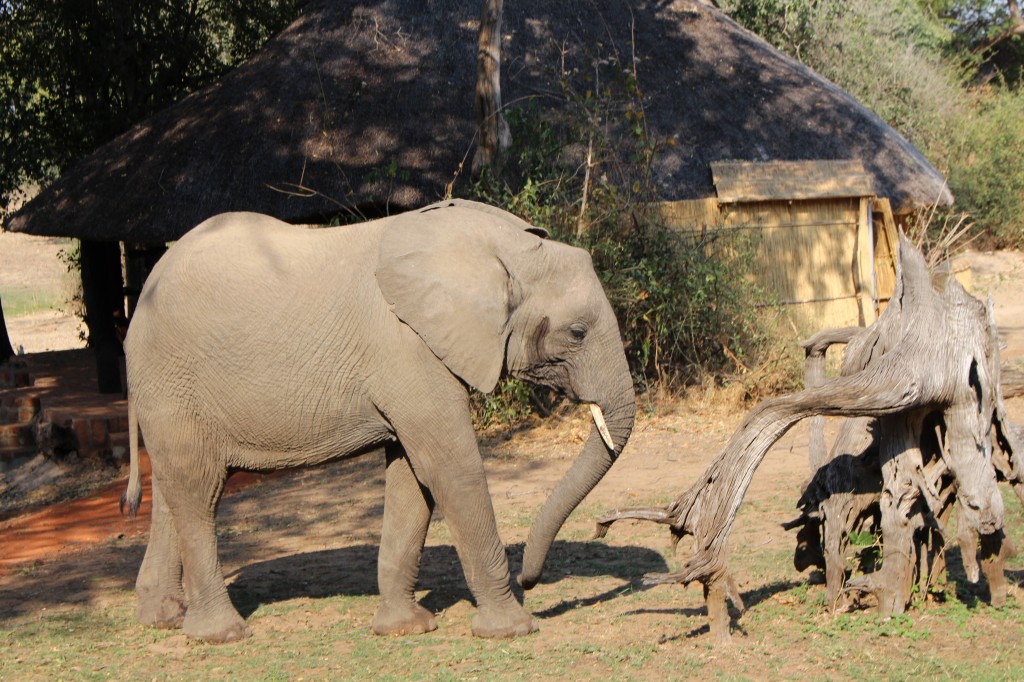 I had been reassured by our guide that so long as we remained on the veranda of the rondavel and didn’t move around, elephants would ignore us. They walked behind our rondavel and around to the next. And then just as comfortably as they came, they continued on their way … and we continued on ours. 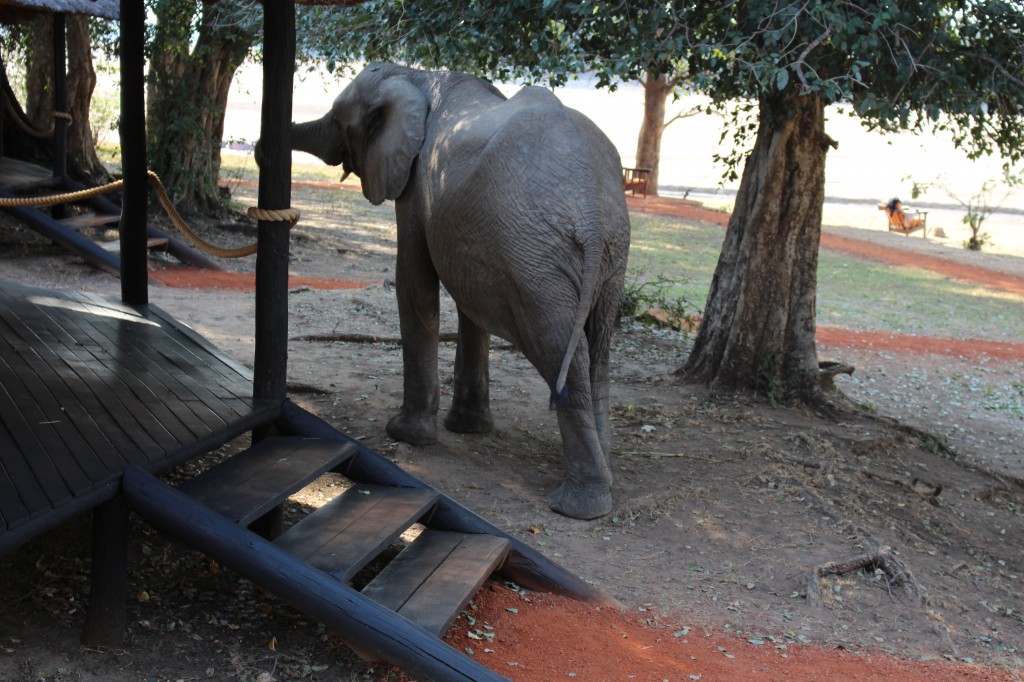 To be continued …
I’ll post more in the days to come.