I must tell you how excited that I was to be at the Festival du Cirque in Monte Carlo this year. Circus Directors from around the world were invited by the World Circus Federation to have lunch with Princess Stephanie at the Hermitage Hotel before the fourth presentation on Sunday January 23. Late that evening, the awards were presented at a special dinner, attended by Prince Albert. He and I have seen one another often over the years when his father presided over the Festival Jury. I congratulated him on his engagement. I’ve been honored several times by being asked to be on that Jury. 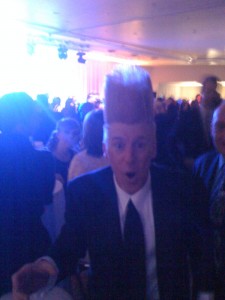 A snapshot from my iPhone, the moment after Bello heard the news of his GOLD CLOWN award.

Here’s the big news.  Big Apple Circus alumnus and wonderful clown, the great Bello Nock was awarded the highest honor, by the jury, the “Gold Clown.” He was thrilled and he certainly deserved it. Over 4 performances he presented a large part of his amazing repertoire: the daredevil Wheel of Wonder, his Bungee-trapeze, his comic trampoline, and his hilarious volunteer William Tell routine. He even presented a group of six dairy cows… a tribute to his Swiss heritage. I’ve often said: nobody works harder in our business than Bello Nock. I was very pleased and am proud to call him a friend. Congratulations Bello!

Equally deserving was Flavio Togni one of the world’s great animal trainer-presenters. His repertoire included acts with horses, elephants, camels and tigers. Amazing.

During that week I arrived in Paris, in time to see the Cirque d’Hiver in its classic building and attend the Festival du Cirque de Demain (Festival of the Circus of Tomorrow). This year was among the best festivals ever, with acts from around the world presented by artists 25 years and younger, including France, Italy, China, Ukraine, Canada, Russia, Spain, Germany and more. There’s a future in the Circus and it is bright and dazzling. As they say over there: “Vive le Cirque!”