Marty had been one of my boyhood heroes. If his name sounds familiar but it’s difficult to place … Marty was a professional athlete as a young man, born and raised in the Bronx. At the 1936 Olympics he was scheduled to run in the 4 x 100m relay for the United States. However, the day before the race, he was swapped out. Why? Well, Hitler’s Berlin in 1936 was not the most encouraging  place for a young Jewish man to succeed. Later in life, Marty went on to be a radio announcer/commentator for several New York sports teams. He was the first television announcer for the NBA and one of the first announcers for the (then) New Jersey Nets. He also worked with the New York Knicks and the New York Giants for over twenty years, as well as on some New York Rangers broadcasting. If any of you can remember back that far, Marty was the man who came up with the slogan “New York Football Giants.”

The other commentator was Dave Jennings. Dave was a football punter who played for the “New York Football Giants” and the New York Jets. After his career with the NFL as a punter, he worked as a radio commentator for both the Giants and Jets games from the booth and in the locker room, covering player interviews both pre and post game. 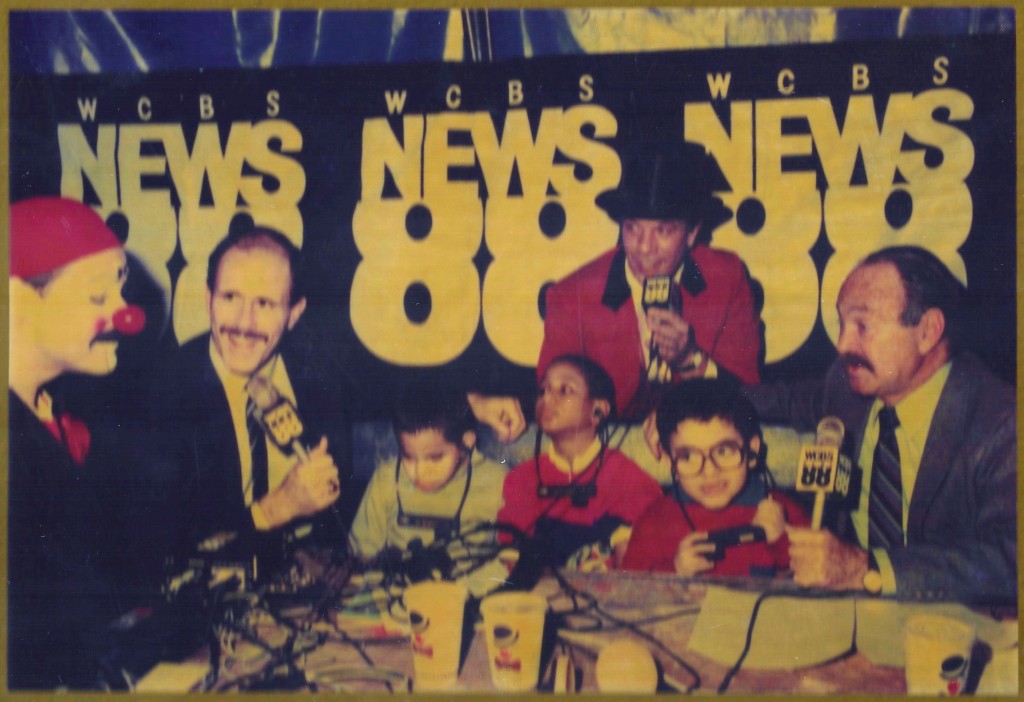 The commentators at the first Circus of the Senses. This picture is from a plaque that reads:
PAUL BINDER
THANK YOU FOR MAKING
“CIRCUS OF THE SENSES”
A TRULY MEMORABLE EVENT
FROM YOUR FRIENDS AT WCBS NEWS 88
NOVEMBER 18, 1988

The photograph above is the only one I know about from the first Circus of the Senses. In the back row from right to left are Marty, me, Dave, and Mr. Gordoon (Jeff Gordon). The three boys in front were visually impaired and are listening to our commentary through their personal hearing devices.

All of this to say that my fellow announcers knew their stuff. In fact, Marty was such a great radio announcer, that comedians often joked that he could describe things that weren’t happening. Marty could fix any improper call with a “lateral”: “He’s tackled on the five yard line. Wait, wait … it’s a lateral, and it’s a touchdown!”

Now, can you imagine how excited I was for the very first Circus of the Senses as I stood between Marty and Dave? Me, a Brooklynite, sandwiched between two iconic New York sports celebrities. I was thrilled.

My longtime performance partner Michael Christensen joined me as commentator during the third year of Circus of the Senses, and since that time, the two of us have done many events together.

One Response to “The Very First Circus of the Senses”