About 10 years ago, I’d had the wonderful experience of narrating Carnival of the Animals with the Boston Pops Orchestra for a children’s concert. In the same year I played the very small part of the evil ringmaster in The Little Orchestra Society’s Babar, in New York. I was extremely good at that role, using my own costume and my “bad Mr. Paul” manner. Remember, dear reader, it was a very small part.

The Little Orchestra Society, who create wonderful classical music concerts for kids, asked me to be in their Peter and the Wolf at Avery Fisher Hall at Lincoln Center in early May of this year.  There would be a 35 piece orchestra. I assumed it was to be as narrator, a part that I’ve always wanted to do, since growing up with Sir Basil Rathbone narrating on my family’s 78 rpm record of Peter. (Rathbone was the original Sherlock Holmes in the movies…but that’s another story). 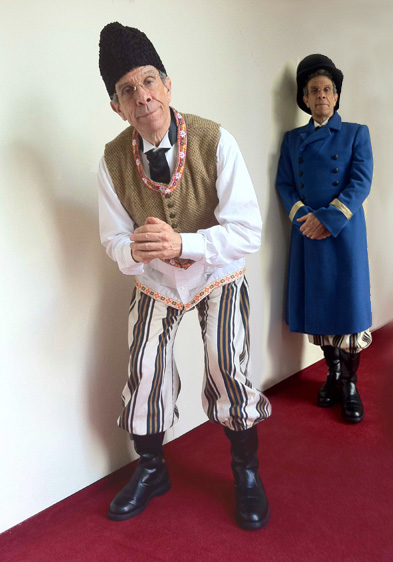 Paul in his Grandpa and Mayorschka costumes for Little Orchestra Society’s production of Peter and the Wolf, May 2011

To my surprise, when they sent the script it was a large part in a play in which Prokofiev’s Peter and the Wolf was only a small part. I was to be Mayorschka, the Mayor of the town of Petrograd, which reenacts Peter each year in order to break a spell that an evil witch has cast upon the town. This, dear reader, is a very large part with many, many lines and cues…which meant memorizing all and playing two characters (in the Peter story I was to be the “Grandfather” as well).

I can hear your reaction, “But, didn’t you speak in the ring all those years as ringmaster?” Yes, but remember, I was Mr. Paul, myself writ large and those were my own words or in the case that Michael Christensen wrote some of them, he knew my voice and I had the right to final adaptation and edit. When I received the script for Peter, I panicked and telephoned the Producer and said that I hadn’t acted character roles for 45 years and wasn’t prepared for this and was afraid that I’d embarrass by myself and LOS and that maybe they should find another person.  “But we’ve already sent out the publicity…Special guest Artist, Paul Binder, Founder of the Big Apple Circus,” was the answer.  I was stuck. Then I found out that I had to dance as well.  All well and good, I’ve danced on stage before, 45 years ago, before my two knee surgeries.  Lines and cues and dancing, oh my!

It was an adventure.  I was very lucky to be paired with a wonderful actress Alta Dantzler who cued me through the dances and occasionally whispered a line or two, under her breath. Whew! There is one story that I have to tell: Mayorschka and Elena (Alta) introduce the characters who will play the parts in the Peter performance, one at a time as the instruments play their theme and they dance downstage.  Only I skipped “Petitsa as the bird.” And went directly to “I, Mayorschka, shall play the Grandfather.”  The Bassoonist never missed a beat and played the Grandfather theme.  As I moved in my Grandfather circle, Alta said: “and the bird,” who I noticed standing there prepared to dance. So when I finished my turn, I said the line: “and Petitsa as the bird” and the conductor and 35 musicians hit the cue without hesitation and the ballerina who played the role danced downstage.  Whew! Whew!
I loved the whole nerve wracking experience and am here to thank Little Orchestra Society [link], Producer Joanne Bernstein-Cohen, Director Annette Jolles, Production Manager Melanie Beck and especially Alta Dantzler.

One Response to “Peter and Paul and the Wolf”